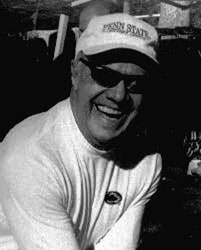 Don Heiges was chosen by his MHS classmates as the Most Athletic in the Class of 1958, so it is no surprise he was selected to receive the Alumni Hall of Fame Award for Outstanding Athletic Achievement. Don was quarterback for the football team for three years, with a record of 13-4-2 as the starting quarterback. Don played Varsity Basketball for three years, scoring 831 points for his career and voted first team South Penn Conference and 2nd team AP All State Team.

After graduating Don attended Harrisburg Area College Center and the University of Pennsylvania. He has an Associate In Claims degree. His athletic endeavors continued as quarterback for the Harrisburg Capital Colts, playing in the Atlantic Coast Professional Football League for one year.

Don's greatest success was as Head Coach of the Chambersburg Cardinals Football Team for seven years from 1976-1981. His record was 90 wins and 14 losses, with six championship teams and a 29 game winning streak at one point! The team was rated as the number one minor professional football team at the end of 1980 and number two at the end of the 1979 season by the Minor Professional Football Assoc. Don was selected to coach the Minor Professional Football All-Star Game in New Orleans the day before the Eagles played the Raiders in the Superdome in the 1982 Super Bowl. The Pro-Football Weekly declared Don Heighes the Minor Pro-Football Coach of the Year in 1979 and in 1980 he was selected Monor Pro-Football Coach of the Year by the Pennsy Family and honored at the Penn Harris with over 300 people in attendance. He was inducted into the Minor Professional Football Hall of Fame in 1993 and the West Shore Chapter of the Sports Hall of Fame in 1998.

Don is retired from Erie Insurance and is married to Barbara Kay Lancaster Heiges, '58. They have three children; Donald L. Heiges, Jr., Deborah Heiges Edwards, and Wendy Christine Heiges Smith. Don is still very active and enjoys watching his grandchildren's athletic events and their other activities.